A large crowd took part in the annual ceremony at the Myall Creek Memorial on Sunday to observe the annual commemoration of the massacre of 28 Aboriginal children, women and men on June 10, 1838.

As well as descendents of both those who were murdered and those who committed the crimes, a large contingent of school children from Inverell, Bingara, Warialda, and Bundarra took part in the ceremony.

The guest speaker was Dr. Timothy Bottoms, who gave a sometimes emotional account of killings which took place from the beginning of European settlement until 1928.

Although smaller than many of the massacres which took place, the Myall Creek case was different because it was the only time where white men were held to account and subsequently hanged for their crimes. A more detailed account of Dr. Bottoms’ speech will be printed in the Bingara Advocate next week. 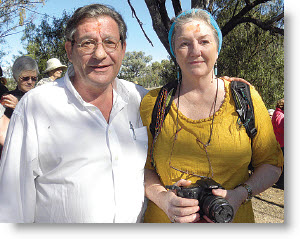 [Photo: Guest speaker, historian, Dr. Timothy Bottoms, with former local resident, Paulette Hayes, who was a key member of the committee responsible for the memorial.  Paulette returned from Lismore for the ceremony.]