Five members of Bingara’s New Leo Club signed the Charter to seal the formation of a new beginning for the history of Bingara. Ethan Brown, Jack Walton, Rod Seage, Kristy South and Crystal Cooper were inducted as Bingara’s first Leos. 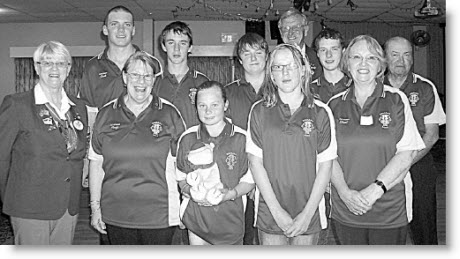 President Ethan Brown spoke to fellow Leos, their families and Lions about the purpose of a Leos Club and the importance of young community members caring for their township and fellow citizens.  After induction and signing of the Charter, Lions District Governor, Deyanne MacDonnell, presented the young club with a mascot who was promptly named “Sparky”.  Leos Crystal and Kristy accepted the mascot and gave Ms. MacDonnell  a Bingara gift pack on behalf of the Leo Club.

Mr John Coulton took time out of his busy election day to welcome the Leo Club into the Shire. John had met with Leos Ethan and Rod at the Bingara Shire Office prior to this and was very impressed with the boys. John presented Ethan with a cheque for $500 to help kick off their fund raising efforts to build a skate park in Bingara.  As well as various other projects Leos have a full schedule for the coming year.

Celebrations didn’t end there for Bingara Lions Club. Gordon Bebb and Enza Gawthorne were also inducted into Bingara Lions Club.  Enza studies criminology and works in UpCycle when she can, alongside Lion Josh Bancroft-Arnott. Enza will join the Leos Advisor team which includes, Lions Gail List and Tony Miller.

Gordon, his wife Gail and family have lived in Bingara for 5 years. Gordon runs a farm out of town.  At the meeting they were welcomed to the Lion family and wished success.

Judy was awarded the  Australian Lions Foundation, James D Richardson Honour Award in recognition of Outstanding Contribution towards the Formation of Bingara Leos Club.  The award was presented by District Governor Deyanne MacDonnell and Past District Governor Phil Bower.

“This is a very special award” Judy said in response. “ I came to Bingara lost and looking for somewhere to belong. I found it here in Bingara  when I joined the Lions Club. Working with Lions and these amazing young people has given back far more than I ever expected”.

Congratulations were paid to Judy and to the  Leos who will be guided by her and the Lions Club in all they do in the future.

If you want to become a part of the Leos club they meet every 1st and 3rd Tuesday of each month at the Presbyterian Church in Cunningham St at 5.45pm. Lions meet every 2nd and 4th Tuesday night at the RSL Club in Finch St at 6.30pm. Or contact Judy, Ethan or any other Lion member.