The Ian Hart Commemorative Ribbon Day was recently run at the conclusion of the Bingara Pony Club mini camp.

The trophy was proudly won by Lexi Brown who tried "extra hard" to get her name on it, having had its significance explained to her by her father Scott.  "This is one worth fighting for Lexi, we want the Brown name on this one!" 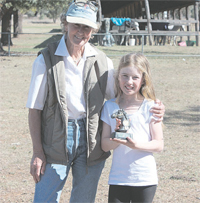 Ian Hart who was tragically killed in a riding accident a few years ago was much loved and appreciated by the Club for his tireless input and the day was made to honour and remember him.

Bev Hart, Ian’s wife is still a regular helper at Pony Club events and the club was fortunate to have her present the trophy to Lexi.