Local Legend to be played by young sports star.

Sometimes someone lives within a community whose characteristics or exploits are so unusual that they gain legendary status. In the town of Bingara such a character was High Kicking Kelly. In the up-coming original musical Big River Dreaming, High Kicking Kelly is one of the legendary characters who are immortalised as “larger than life” in the town’s history.

During the 1950’s High Kicking Kelly lived in a humpy lean-to that adjoined the remains of a burnt out tree trunk on the northern bank of the Gwydir River opposite the town. He was an older man at that time but apart from his unusual residence he had two other idiosyncrasies.

Firstly, although a tall and older man, he had a very flexible body and was able to kick his leg vertically above his head. This unusual dexterity enabled him to win bets from strangers who came across him at the local pub.

“I have heard bits and pieces about High Kicking Kelly,” said the composer of Big River Dreaming, Rick Hutton. “He seemed larger than life and worthy of a song and a kind sentiment in our town’s history,” he said. 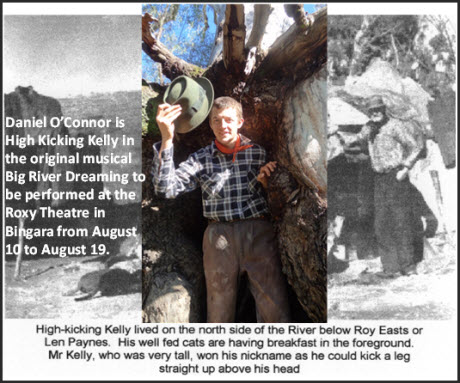 The part of High Kicking Kelly will be played by Year 10 student at Bingara Central School, Dan O’Connor. “Dan is an accomplished sportsman and his athletic ability as well as his height made him a natural choice,” Rick Hutton said. “Add to this his ability to act, sing and dance, and Dan will be a very convincing and young version of High Kicking Kelly.”

Big River Dreaming will showcase more than 150 students on the stage and an orchestra of 23 musicians for its six performances commencing with the World Premiere Gala opening night on Friday, August 10 at the Roxy Theatre. Tickets are available through the Bingara Tourist Information Centre by phoning 6724 0066.