When it comes to playing soccer, Brooke McKinnon is a natural and it seems North West State team selectors agree. Eleven year old, Bingara Central School student, Brooke never imagined she would be off competing in soccer at state level considering she hasn’t really played a whole lot of soccer in her life. 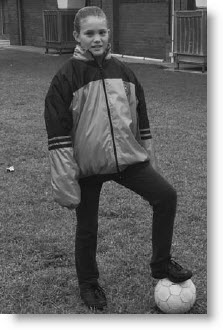 From kicking the ball around in the back yard and a few years of school soccer when she was in Barraba, it seems her natural skills have developed and come June she will be representing the North West team at NSW PSSA State Carnival at Camden.

Brooke’s selection came about after being selected in the Inverell Zone team.On March 19, Brooke played in Inverell where she was selected for the Northern Zones team to compete at the North West Carnival (Armidale) on March 30. Following the carnival in Armidale 14 players were announced for the North West Team, including Brooke.

Brooke and her team will play at Camden, June 2-4. They will play seven games over three days. Brooke has been training at home as well as attending two training days with her team in Tamworth.

Brooke told the Advocate that she was very excited to be competing at State level.