A welcome cool, cloudy morning made for beautiful conditions at the Bingara Historical Museum for the annual Australia Day celebrations.

The Master of Ceremonies, Tim Cox welcomed the crowd to the event, which began with breakfast cooked by Bingara Lions Club members.

Deputy Mayor, Catherine Egan welcomed Australia Day Ambassador, Matt Levy, and his mother, Penny, to Bingara.
“Matthew is a young man who epitomizes what Australia is about, a nation of opportunities,” Cr. Egan said.  “Today we come together to acknowledge all that is good about this nation, to feel pride in the achievements of this young country.

“Every Australian has opportunity, to use the health resources, education, technology and the right to democratically elect who makes policy and law. If you choose not to use these opportunities wisely, then you squander opportunities.

“Continuing to look to the future is where new opportunities will present, education is the key to opportunity for everyone, and there is no better way to build our future than through education.

“Today is a time to reflect and celebrate our own community, we live there because we love the tranquility and beauty of what nature has endowed us with, the mountains, the clear blue (or today, cloudy) and starry night skies, our beautiful river and the very productive lands that are here.

“We live in an amazing community that values, respects and cares for each other and there can be nothing more Australian than that.

Noel Pearson summed up Australia Day when he wrote ‘Australia has an Indigenous heritage, a British foundation and a multicultural character.’

“Congratulations to the nominees, without volunteer people like you in our community that do the hours and hours, we would cease to exist,” she said.

Cr. Egan also thanked the Lions Club for cooking the fine breakfast, the Bingara SES for supplying and erecting the shades, Scott Crispin for music and sound, Bingara Central School for the loan of the sound system, Rev. Gordon Stewart who led the Prayer to the Nation, Bingara Central School student leaders, Angie Frewen, Brock Galvin and Phoebe Craddock who took part in the ceremony, Council staff for preparing the museum grounds, and MC Tim Cox.

Ambassador, Matt Levy, who was born 15 weeks premature and has cerebral palsy, spoke of his struggles and eventual success in the pool at the Paralympics.

Matt was then called on the present the Australia Day citizenship awards.

The Lions Club was presented with a special award in recognition of the work Lions members do in and around Bingara.

The Fund-raiser for Raylene was a welcome choice for Event of the Year, and Young Citizen of the year is Rachael Heaton. 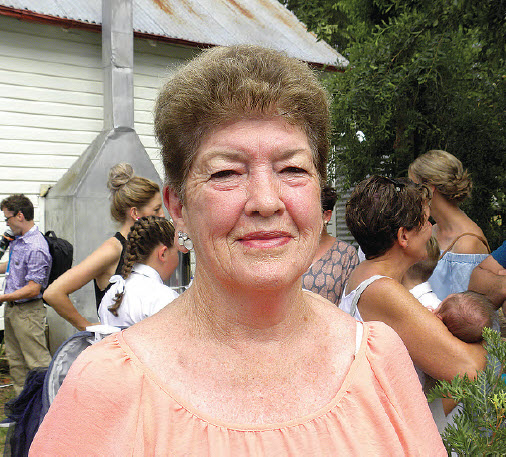 The announcement of Maureen Craddock as Citizen of the Year was met with delight and much applause.

Those who nominated Maureen, described her as a beautiful person inside and out.  She puts herself out time and time again for others.  If someone is ill Maureen, will cook them chicken soup to get them back on the right track.

If there is a bereavement in a family, out of the goodness of her heart Maureen cooks meals, or cakes for the families, so it is one less thing they have to worry about.

Maureen has been involved in a number of community groups over the years, these have included:- Friends of Touriandi, Westpac Helicopter Support Group and Bingara and District Cancer Support Group.

For 27 years Maureen has been an important part of the Home Care now Australian Unity team – even learning to master new technology. Along with everything Maureen does for others, she never asks for help for herself or her family – who would be totally lost without her.