The Chair of the Australian Rural Road Group, John Coulton and the National Infrastructure Coordinator of Infrastructure Australia, Michael Deegan jointly signed The Bingara Accord and formally launched a landmark report which proves that Australia’s nearly $20 Billion dollar road spend can be made accountable, efficient and fair across all communities nationwide – a result which is a far cry from the current system. 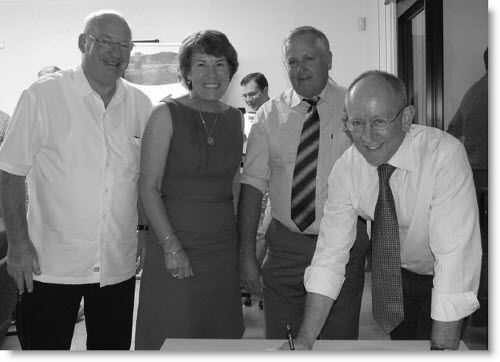 Attending the function, held at the Living classroom on Australia Day, attended by representatives of both bodies, as well as local Members of Parliament, Mark Coulton MP, Adam Marshall MP Scott Macdonald MLC, and Senator John Williams. Mr. Deegan described the current system of dealing with roads as “like a beaten army.”

The ARRG Chair, Cr. John Coulton, noted that “the Accord recognises the strength of the original argument put forward by the ARRG that local rural roads must be seen as a significant national business – and that reforms of national road spending in the interest of efficiency and equity can and must be pursued”.

In the past year, the ARRG worked with Infrastructure Australia and seven local governments in NSW and Queensland to prove that accurate and international standard condition reports of every road could be easily generated – so that funding over time could go towards addressing the real problems of the road network.

The Federal Transport and Infrastructure Agency had previously counselled the Rudd/ Gillard government that this sort of asset reporting and targeted funding was likely to be impossible, because local governments would not be able to produce such asset reports.

“It was never really about money”, Cr Coulton said of his group’s policy reform efforts, which have won endorsement from Infrastructure Australia as ‘the solution’ to productive reform of Australia’s roads, “it is about putting the available resources into road projects that value add and return greater dividends to the agricultural sector”.

Put simply “A greater efficiency return of 5% to 10% on the national road expenditure of $19 Billion annually will give a performance improvement of around $1.9 Billion.”

With regard to the National Road Asset Reporting Pilot report Cr Coulton stated “The ARRG have been putting forward the case for four years that local government can develop the information required to provide the base data to effectively measure the economic output performance of roads rather than simply measuring success by the dollars actually spent”.

“Despite all the knockers the ARRG have encountered along this journey, and with the invaluable assistance of Infrastructure Australia, the Australian Rural Road Group has led the way in developing the tools required”.

Both Cr. Coulton and Mr. Deegan noted that the Prime Minister, Tony Abbott is on record as saying he wants to be remembered as a road building Prime Minister.

“Fancy that, a politician using roads as leverage and subsequently winning an election,” Mr. Deegan remarked.

“This represents a great opportunity.” “Our message to him and to Deputy Prime Minister Truss, who also holds the Infrastructure and Regional Development portfolio, is “we welcome that – and we have now developed a reform that will guarantee you can start spending that $20 Billion far more efficiently, so please get on board, don’t listen to the naysayers in your bureaucracies, take heed of Infrastructure Australia’s views and deliver real road reform”, Cr. Coulton said.

The accord reads: The parties wish to pursue national prosperity through real economic improvements to important regional roads.

1. to seek to bring roads into line with the mainstream practices of Australia’s infrastructure sectors;

2. to employ user pays-user says trials for road improvements to test this approach;

3. that the Australian Rural Roads Group asset and investment template is appropriate for local roads throughout regional Australia; 4. that submissions should be made to include suitably aggregated proposals in Infrastructure Australia’s national infrastructure audit and infrastructure priorities list.