Over 270 people attended the 15th annual Nashos Reunion in Bingara last Saturday week, making it the biggest yet.

The march attracted over 200 National Servicemen and women, and about 20 students from Bingara Central School.

This year, in recognition of the close bond which has developed between the Nashos and the Central School, students were invited to march at the head of the parade, behind the Inverell Pipe Band.

As the parade passed the Shire Council offices, Colonel Chris Donoven took the salute. With him were Austin Mack representing the Bingara RSL Sub Branch, Rev. Brian Darbyshire, Rick Colless MLC, and Cr. Peter Pankhurst.  A short ceremony followed in the RSL Memorial Gardens, before lunch in the Club. 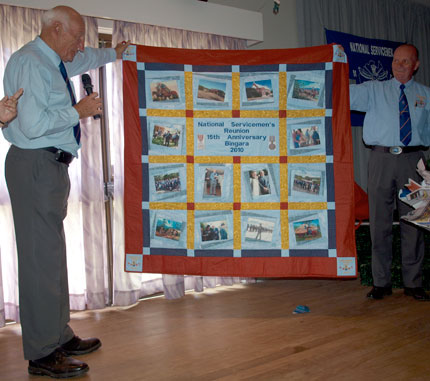 This year’s reunion also marked the retirement of John Curruthers, who has coordinated the event for the past 10 years, assisted by John Harris.  Darcy Elbourne from Taree has taken on the role of coordinator. His wife, Margaret, a talented quilter, made a quilt featuring photographs of previous reunions, which was presented to Mr. Curruthers at the luncheon on Saturday.

Member for New England, Tony Windsor and Member for Northern Tablelands, Richard Torbay, both keen supporters of the Nashos’ Reunion, were presented with certificates issuing a permanent invitation to attend all Nashos reunions , parades and ceremonies, and all other functions conducted by the Reunion committee.

A Federal redistribution will see Bingara move to the seat of Parkes at the next election.  The certificates were signed by Ken Bilbsorough, Lucy Bilsborough and John Curruthers.

When the first reunion was organised by Ken and Lucy Bilsborough, many people assumed it would run for a few years, then fall by the wayside.  Fifteen years on, the reunion is going from strength to strength.

Ed and Georgie Trask of Newport, Queensland, are part of the Nashos Touring Club of Queensland. After the weekend, they were travelling to Moree for the Nashos touring Club quarterly get together. This, they said, involves about 22 caravans and camper trailers.

The annual Church Service held at St. Johns Anglican Church on Sunday morning saw the church packed. A barbecue at the Riverside Caravan Park on Monday night concluded what has become a four day event.