The 48 people riding in the 2014 Ride for the Chopper, in aid of the Westpac Rescue Helicopter Service, and their support crew, were very glad to pedal into Bingara on Tuesday of last week. 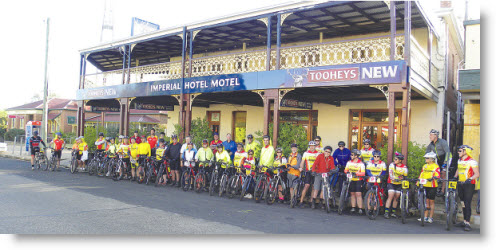 Ready for another day: Most of the 48 riders taking part in the Westpac Rescue Helicopter’s 2014 Ride for the Chopper lined up in front of the Imperial Hotel before heading off to Barraba.

They had ridden from Inverell, via Gum Flat, Copeton Dam and Keera, and had stuck a strong head wind for the last part of their trip.

But the somewhat hilly trip from Inverell was a doddle compared with the hills the group encountered on Wednesday as they made their way to Barraba via Upper Horton, and the dreaded Bereen Mountain.

Barraba man, John Wauch, put out a challenge to the riders, promising to pay $10 to each of the riders who made it up the Bereen Mountain without getting off their bikes. About 35 of the riders made it to the top, and Mr. Wauch made good his promise, boosting the funds raised by $350.

The riders returned safely to Tamworth on Friday.