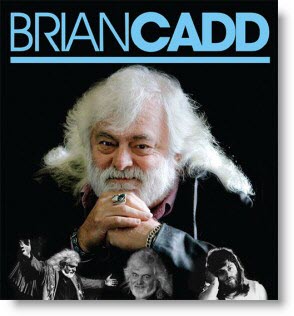 The evening promises to be fun for all the family with food stalls, kid’s entertainment and live music performances by local duo Little Poppy.

Pack a picnic or enjoy a meal from one of the many food stalls. This is a night under the stars not to be missed.

Tickets are only $10 per person and can be purchased online prior to to the night.

Cranky Rock is a spectacular spot to launch this fabulous event.  Don’t miss it!

Brian’s colourful career
After a highly successful career as a writer, producer and member of several of the most influential bands of the 60’s, Brian Cadd became Head of A & R and House Producer for FABLE RECORDS in Melbourne in 1970. Owned by recording industry legend Ron Tudor, Fable Records forged the way for the first wave of truly all-Australian record companies. Duties included A&R decisions regarding material and record direction plus in-studio production responsibilities.

In 1972 Cadd formed BOOTLEG RECORDS in Melbourne; a sister label to Fable Records which he co-owned and co-managed with Ron Tudor. Bootleg Records was the first fully independent Australian record company to release a line of product in the United States. From its inception until it was sold in 1976, Bootleg Records under the management of Cadd, led the way in the fight for Australian music to be owned by Australian companies, rather than multi-nationals.

Responsibilities included all creative management and liaison with independent distributors and promotions staff. Additional responsibilities covered record production, A&R administration and the organization of all promotional and touring activities for the entire artist roster. To that end, he founded GENERAL ARTISTS, the management company and booking agency arm which managed the Bootleg roster of artists, among others and which organized all “live” appearances and touring, including the conception and production of several award-winning National television specials.

From 1973 to 1975, he was also one of the twelve Directors of APRA (the Australian Performing Rights Association). His duties included decision-making with regard to the disbursement of performance royalties collected on behalf of Australian writers signed to the association. He was the first contemporary music director.

In 1976 he was signed to CAPITOL RECORDS as an artist and moved to Los Angeles. For the next 20 years he worked in all aspects of the International music scene from writing, production, publishing, management and the planning, development and administration of several successful music production companies. Additionally he created FAIRYDUST MUSIC, a worldwide publishing company now owning in excess of 300 song copyrights.

Cadd returned to Australia briefly between 1983 and 1985 as Managing Director of GRAFFITI RECORDS. An Australian custom label associated with the giant POLYGRAM RECORDS GROUP, it was specifically designed to extend Polygram’s A&R activities in young early teen’s music and AOR. Its artists included Tina Arena. His duties encompassed all areas of A&R administration, promotion and marketing planning, liaison with Polygram Records and record production.

In 1986 he returned to Los Angeles and formed MATE MUSIC INC., in partnership with leading Australian singer/songwriter Max Merritt. A production house and studio facility aimed at the advertising industry; its principal client was the giant Australian advertising agency MOJO, which commissioned work on the TOOHEYS, FOSTERS, SWAN, XXXX and QANTAS accounts. Additionally Mate Music provided scores and music for film.

In the late 1980’s Brian toured in France extensively as Musical Director to JOHNNY HALLIDAY.

In 1989 Cadd relocated to Nashville where he built the SALAD BOWL STUDIO facility and owned and operated several successful music production companies. For 7 years he participated in the enormous explosion of country music onto the national and then international music scene.

Brian Cadd moved back to Australia permanently in 1997 after 25 years working in the International music industry in both the U.S. and Europe. In March 1998, Cadd accepted the position of Managing Director of STREETWISE RECORDS in Brisbane, encompassing 3 labels: STREETWISE RECORDS, BELLY LAUGH RECORDS and STALLION RECORDS. The Group had manufacturing and distribution deals up until 2001 with WARNER MUSIC in Australasia and APEX/BMG in the U.K.

Brian in 2000 accepted a post as President of the AUSTRALIAN MUSIC FOUNDATION. He was also Chairperson of the AUSMUSIC INDUSTRY ADVISORY BOARD and lectures frequently at UNIVERSITIES around the USA and Australia on the Business of Music.

He became a Director of Support Act Limited in 2007 and was responsible for setting up state by state branches outside of NSW. His conceptual lunch group known as The Debonairs also now meets once a month in each State and numbers over a thousand members/lunch reprobates! The group serves as a fund raising arm for Support Act Ltd. In 2008 Brian received the ARIA Hall of Fame Award. In April 2010 he won the MO Award for Best Rock Act in Australia.

Brian now resides in Byron Bay with his partner, Amanda Pelman, and son Austin age 14.  His selfpenned autobiography, “From this Side of Things “ was released in November 2010.