Rare opportunity to experience the very best in regional filmmaking

Now in its ninth year, entries have been received from across the region including Bingara, Inverell, Armidale and Moree.

The Festival, held at The Roxy on Friday 14 and Saturday 15 September, is not just exclusive to filmmakers.  The public is invited to experience the spectacular selection of work made by Festival entrants as well as the highly acclaimed and award-winning films of the special guests.  This is a rare opportunity not only to meet the Festival judges but also to view some of their work.

Rob Carlton is a Logie Award winning Australian actor and writer, best known for his starring role in the ABC’s Paper Giants: The Birth of Cleo in which he played the charismatic king of Australian media, Kerry Packer.  Having won the Silver Logie Award for his performance,  Carlton will reprise the role in the new series of Paper Giants: Magazine Wars starring Rachel Griffiths that will go to air next year.

Carlton has been a professional actor since the age of 14 and has appeared in many television series from Young Ramsay to A Country Practice, Home and away, Blue Heelers, Water Rats, Fireflies, McLeod’s Daughters and All Saints.  He has also appeared in many movies including Strange Bedfellows, You Can’t Stop the Murders and The Year My Voice Broke. In 2006, Carlton won Tropfest with the short film Carmichael & Shane that he wrote, co-produced and co-directed. 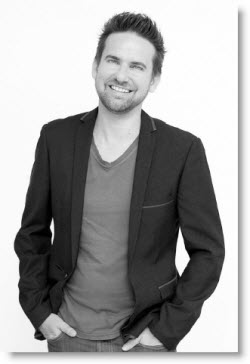 Jason van Genderen has become a poster boy for how to make ground-breaking short films on a limited budget.  Hailed for using unconventional techniques, Jason has a unique ability to tell complex and moving stories – in less than seven minutes.

A new face on the Tropfest scene in New York back in 2008, Van Genderen blew judges away with his poignant mobile phone produced film, Mankind is no Island.  The short film, which portrays homelessness using street signage and words, was shot on a budget of just $57. It has since clocked up over a million views on YouTube.

Celebrating its 20th anniversary this year, Tropfest is Australia’s most prestigious short film festival and the biggest festival of its kind in the world.

Van Genderen will be conducting workshops on a new medium to the Festival this year – shooting and editing films entirely on mobile phones.

A further Festival highlight will be the screening, open to the public, of the Australian feature Wish You Were Here on Saturday September 15 at 4:30pm. This film which premiered at the Sundance Film Festival earlier this year stars Joel Edgerton.

One of Australia’s hottest actors and star of more than 40 international and Australian films, Joel Edgerton is soon to star in the blockbuster “The Great Gatsby”.

Wish You Were Here is a psychological drama, which tells the story of four friends who travel to Cambodia and the consequences when only three return.

The North West Film Festival invites everybody to enjoy this fantastic celebration of what can be achieved by people who believe in their rural community and its future.