Six students and the Principal of the Kamikawa English School at Kagoshima, Mr. Kamikawa, were special guests at the Bingara Central School assembly last Friday week. 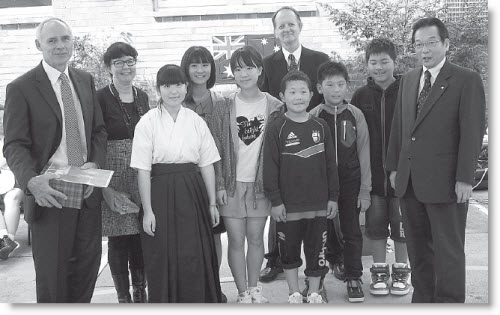 Each of the students performed their ‘special skill’ for their assembly, showing their talent for music, dance, archery, ball skills, and even drinking milk very fast.

Their Principal, Mr. Kamikawa, also proved to be a dab hand as a magician, entertaining the assembly. The group was collected by Lions Club member, Steve Adams, who drove them to Bingara. The students were billeted with local families, while Mr. Kamikawa stayed at the River House.

The students and Mr. Kamikawa were shown the sights of Bingara before they returned to the Gold Coast to continue their excursion. 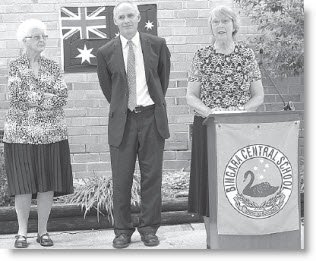 The assembly also acknowledged the long serving and wonderful contribution made by local women, Jenny McGowan and Pattie Steiger, who have taught scripture at the school for many years. Central School Principal, Mark Vale, commented that the two ladies had probably taught some parents of current students.

Mrs. McGowan thanked the teaching and office staff at the school, as well as the parents “who allowed their children to come to Scripture.”

“We loved our Friday mornings. I would get dressed up and someone would say ‘where are you going?’ and I would say ‘I’m going off to teach scripture.’ I really love the children and loved being able to teach them.

“I would also like to wish the Rev. David Swan and his team all the best.”

Mrs. McGowan also paid tribute to her husband, Andy, and to Mrs. Steiger’s late husband, Clive. “Without their help, we could never have done this,” she said. She also spoke about their visits to Touriandi Lodge, first suggested by former student, Mitchell Heal, and enjoyed by residents and visitors alike.

Mrs. McGowan concluded by urging the children to “Love the Lord, do unto others what you would like them to do unto you, to say thank you, and to give your best and be proud of your school.” Two students presented flowers to Mrs. McGowan and Mrs. Steiger in appreciation of their many years of teaching Scripture.