The Bingara Lions Club is the recipient of an Australia Day Appreciation Award.

Every week or month the Bingara Lions Club members seem to be involved in something in the community, either supporting an event or co-ordinating one. 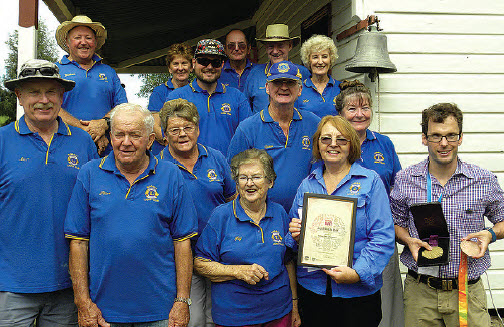 Throughout the year Lions donate their fund-raising to the Bingara MPS, Central School, Touriandi Lodge Aged care facility, as well as helping families in crisis.

A lot of the work done by the Lions Club is done discretely, so the public does not hear about it.

Over the years Lions have sponsored Bingara school students to “Camp at the Coast” as well as sponsoring “Peace Poster” creativity initiatives.

This year Bingara Lions club will celebrate 40 years of service to the community.

The award was accepted by President, Keith Macartney, and Secretary, Gail List.  “Thank you for this award,” Gail said.

“Bingara Lions Club was formed on 28 July, 1978 by ten men, some are still in our community, and two are still members with us today, thank you Peter (Pankhurst) and Ian (Grieve).

“We are always grateful for the community’s generosity with our raffles and barbecues. These funds go to help the hospital for equipment and families in need plus many other things.

“We would like to acknowledge our Past President, Judy Adams, she always said it is a team effort,but a good team needs a strong leader and that she was. We miss her dearly. But we will continue to do what we do best,” Gail said.

Gail’s comments were endorsed by new President, Keith Macartney, who urged people to be involved in the community.  He described the Lions Club as the ‘best club in town’, and Bingara as ‘the best town in Australia.’