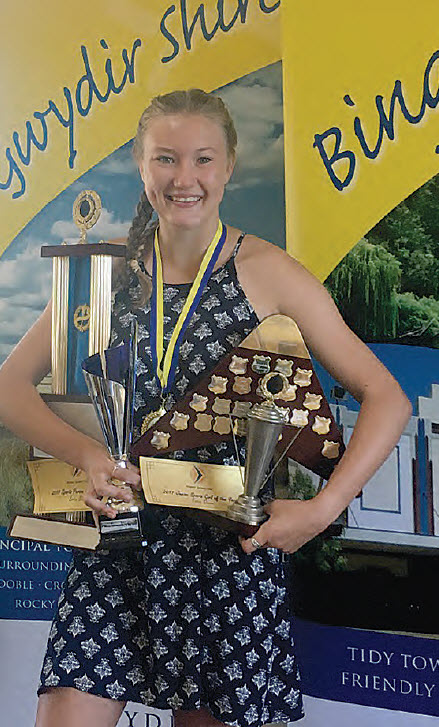 Erica Dixon was unable to attend last Fridays Bingara Sports Awards due to her commitment to her end of year ballet performance, but when she eventually did arrive home she was a very excited young lady.  Erica was not only the winner of the Junior Sport Girl at this year’s awards but she was also judged the most outstanding athlete of the Year and she was honoured to be named the 2017 Bingara Sportsperson of the Year.

Erica has achieved in so much this year across a great variety of sports and this diversity proved to be the difference to the judges who chose this young sporting star as the best of a very talented group of individuals.

Erica was in Inverell at her end of year dance performance last Friday evening during the Awards ceremony and was unaware of her achievements. It was this commitment to training and performing that caught the judge’s eyes. Erica was well represented on the night with Grandfather Tony Miller standing in to receive the awards and Erica’s grandparents, Trevor and Aileen Galvin, on hand to proudly witness the announcement.

This year’s services to Sport was the most keenly contested award with nine outstanding nominees presented to the judges for consideration. After a long and difficult judging of the comprehensive achievements of these worthy nominees, John Sullivan, nominated by the Bingara Cricket Association, was awarded the HF Batterham Award for outstanding services to sport.

John’s professional administration skills and commitment to the regions cricket competition has seen cricket go from strength to strength in recent times. One of John’s proudest achievements was the successful grant funding applications he put together which has seen much needed improvements to local cricket infrastructure and improved playing conditions.

The other hotly contested category on the night was the very well supported Team of Year Award which is sponsored by Gwydir Shire Council. From a very strong contingent of teams it was the Bingara Pony Club Jamboree/ODE Team who were declared the winners after their outstanding year. The Bingara Club was able to dominate this year’s Zone 8 Jamboree and the One Day Event when hosting the Zone earlier this year. The Pony Club was well represented and the Award was received by a contingent of Junior Riders from the Club and Tiarna Sullivan spoke on behalf of the club when accepting the Award.

Other section winners were Madeleine Standerwick and Brock Galvin in the Sub-Junior sections. Both of these budding stars had outstanding years representing the region at State Carnivals in athletics and swimming. Erica Dixon won the very strong Junior Girl Section before going on to be announced Sportsperson of the Year. Junior Boy was won by horseman Luca McLachlan for his achievements in polocrosse and at Pony Club.

This year saw the return of the Veteran Sportsperson of the Year Award which was originally donated by H Fay & Sons. Susan Hutton was proudly on hand to award this trophy to Richard Scutt after his outstanding year on the golf course in the last year. Richard has won a number of events this year in not only the veteran category but also in Open Golf tournaments.

This Year’s Sports Awards were again well supported as witnessed by the large crowd present at the Bingara Sporting Club Awards Dinner. Sporting Club President Tim Cox was very pleased with the quality of the nominees and encouraged all those present to continue competing and supporting the vast variety of sports available to the Bingara Community. This Year’s awards saw nominations from across 28 sports which is testament to the strength, enthusiasm and tradition that Sporting endeavours hold in the Bingara Community.

Citations of Section winners for this Year’s Awards

School Sports
• Swam at the state swimming carnival at Homebush in the Senior Girls relay team and as an individual in breaststroke.
• Came first in the school cross country and qualified for regionals.
• Qualified for regional athletics
• Played in the school rep. team in Netball, League Tag and Touch Football
• Trialled for the regional under 18s Netball team
• Trialled for the state under 18s Soccer team
• Competed in a B-Grade ladies State League Netball team in Tamworth
• Won the C Grade Ladies Doubles in the June long weekend Bingara Annual Bush Bash (Tennis)
• Competed in the Inverell Dance Eisteddfod
• Auditioned and danced with the Melbourne City Ballet Company at the Roxy performing a part in ‘A Mid Summer Nights Dream’
• Plays for Bingara Minor League senior league tag team
• Plays in the Bingara Oztag competition
Erica has a positive attitude to sport. She is willing to apply herself 100% and is prepared to try new sports.

Other Finalists were Anna Hull, Brooke McKinnon and Jacqueline Coombes.

Madeline participated in the School’s Athletics carnival achieving Junior Girl Champion and progressing through to zone and regional athletics. Madeline also qualified for a special event for 2017 only for Pacific School games and competed at State level in this special event. Madeline also competed at the Central School’s cross country carnival and progressed through to the zone and regional carnivals. Madeline is passionate about athletics and shows enthusiasm when competing.

Brock participated in the Bingara Central School Swimming carnival achieving the Senior boy Champion. He broke four records, some of them long standing records. He then went on to represent at the Zone, Regional Carnivals and the State Carnival at Homebush.

Brock also made it to the Speedo Sprint finals at Homebush. Brock was selected in the Achievers Squad for the New England Central North Development Squad and went back to Homebush with this squad in October where he placed 15th out of 53 in Breaststroke and broke three personal bests. He swam at Wellington in January in the NSW Country Regional Carnival.

Other Finalists were Vashton Gallen, Cooper Cory and Liam Johnson

Luka won the Ian Hart Memorial Trophy at Pony Camps mini camp. He competed at the State Junior Challenge at Narrabri for Polocrosse. Luka represented Northern New England Zone at the NSW Zone Polocrosse Championships. He won multiple best and fairest awards at individual polocrosse carnivals and was the highest point scorer for under 13’s at Pony Camp.
Luka is a team player with natural ability and a positive attitude. He is a willing learner who is persistent and very resilient.

Other Finalists were Jayden McLachlan and Lachlan Webb

Robbie has been involved in many different sports in Bingara. He recently travelled to Coffs Harbour for the Oz tag state cup. Robbie is always eager to give 100% of himself to which ever sport he is playing or coaching and is a great role model for other players and juniors.

This team were the winners of the Zone 8 Jamboree for 2017 and the One Day Event Team. They welcomed other Clubs to the Jamboree and assisted in the running and co-ordination of events.

his team displayed sportsmanship in exceptional behaviour and horsemanship.

Scott Brown, Life Member and Chief Instructor – “I have never witnessed a more dominant display by any team at a Zone 8 Jamboree. Bingara only won two or three individual point scores but as a team, they were relentless. Every Bingara Pony Club competitor did us proud and being named the Zone 8 Club Champions was well deserved”

Richard is a true gentleman on and off the course. He is generous with his time and skills helping other volunteers on the golf course whenever his time is required. Richard regularly maintains the sand bunkers on the course, weeds gardens, picks up branches and anything else that needs doing. Richard always has encouraging words for other golfers and never loses his cool. He is a great supporter of the Bingara Sporting Club.

Other Finalist was Jill Carmody.

John was the driving force in getting the cricket pitch and nets at Gwydir Oval replaced. He dedicated many hours to pursuing funding from various sources to the total of $30,000 to enable the project. John then organised volunteers and worked with them to make the rebuild happen.

John has always been the first to put his hand up for anything that needs doing. His attitude has been the biggest influence in strengthening cricket in the region.

John applies his vast knowledge and skills to his role within the local cricket association and brings a level of professionalism which drives the success of this strong competition.

The upgrades to the cricket facilities has turned Bingara into a suitable central location for representative sides and training clinics to hold their events. This will provide local juniors with the opportunity to participate in first class events. Women’s cricket in particular will use the facilities and supplement the recent surge in women’s sport.