A fierce storm which swept through Bingara last Thursday afternoon threatened to ruin the annual Bingara Christmas Carnival. However, despite heavy rain and strong winds around 1pm the clouds cleared for a lovely sunny afternoon which attracted a large crowd of locals to the main street. 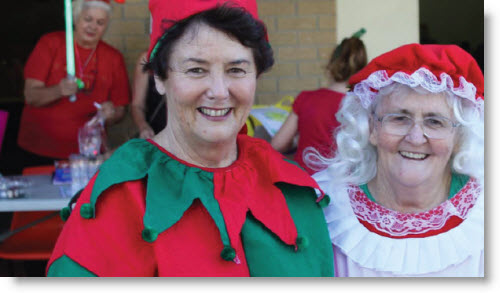 Mrs Clause (Cr. Marilyn Dixon) and Santa’s Helper (Cr. Catherine Egan), pictured above, made a special appearance along with Santa Clause who took time out of his busy schedule to enjoy some photos with the children of Bingara before giving them some early Christmas gifts.

With a jumping castle on hand, stalls and the ever popular concert with local performers including, Bingara Preschool and Bingara Central School, the evening was one for the whole family and really brought the Christmas Spirit to town.

Adding to the excitement was the second year of the Christmas Tree Decorating competition which saw the ‘Jingle Belles’ consisting of Fiona Craddock, Nadine Young, Kylie Johnson and Brooke Marshall take out the winning spot for the second year running.

The evening concluded with the lighting of the Christmas Tree in Fays Park.