Visitor numbers in the Gwydir Shire are soaring if those calling in to the Visitor Information Centre’s (VIC) are any indication, peaking over the last two weeks of school holidays. After restrictions were eased in June, allowing unrestricted travel across regional NSW, there has been a steady increase in travellers calling in to see what the region has to offer.

For Bingara, numbers of people with queries at the VIC have risen sharply from 546 in August to 855 in September, with October looking equally as promising. Warialda VIC also reported a pleasing return of travellers stopping by.

With borders still off-limits, many NSW residents – particularly those from the coast, are taking the opportunity to explore what has been on their doorstep, with most pleasantly surprised.

Jenny Meade, VIC officer, says that a considerable number of tourists are returning after a good experience on a previous trip. That combined with many new faces has made for a buzz in the streets. “There have been a lot of repeat visitors. Some are back even after ten years, having had a good experience when they were here before,” she said. “On a day to day basis numbers are definitely up.” 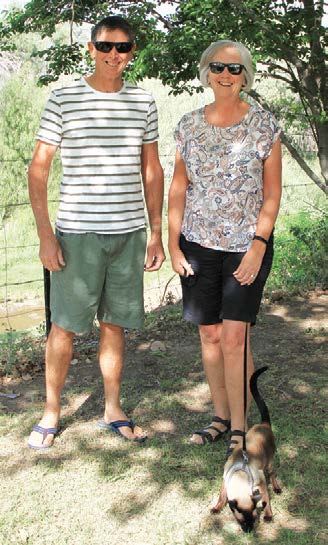 Bingara retail and food outlet owners concur with the rate of people coming to town over the past months, especially in the school holidays. “The past couple of weeks have been equivalent to what we would see during Easter trading,” said Caitlyn Smith of Bingara Bakehouse.

Bingara Wattle Arts and Crafts have also seen such steady trade that they chose to open on the Monday of the October long weekend for another busy day.

While free camping on the Gwydir River is an attractive option the caravan parks in the Shire’s two major towns have reported good occupancy rates over the holiday period.

For Sue and Brian Chivers of Swansea, NSW, their stay at the Bingara Caravan Park over the past week has been just a small part of their tour of the region. Travelling with their cat, ‘Jasper’, they consider the whole area a fantastic place to visit.

“The peace and quiet, the great caravan park, the river and photo opportunities are all great. We loved the look-out, Sawn Rocks were amazing and the Waa Gorge was fabulous.

It seems the Gwydir Shire has the complete package for attracting tourists to town with many praising what the town had to offer while at the visitor centre. “The compliments of the town range from, ‘it’s so nice and friendly’ and ‘it’s so clean’ to being a bigger town than many thought it would be before they came,” said Jenny.

The most common comment when visitors come through the door: “It’s just such a lovely town.”