The Roxy Theatre in Bingara is well known for its remarkable resurrection which saw the faithfully restored theatre re-open to the public after lying dormant for over forty years. The Roxy’s latest revival feels eerily reminiscent of that time.

Following a tough two years of lockdowns and COVID restrictions, the Roxy Theatre is slowly emerging rejuvenated and revived with an exciting and jam-packed line up of shows and events.

Following a false start in August last year which saw the show’s opening night brought to an abrupt halt by snap lockdowns, the NWTC is delighted to finally bring the production to life.

Producer of Oliver Twist, Robyn Phillips, says that after a long time of uncertainty the company is looking forward to finally being able to present the show. ‘So much hard work was put in by the cast and crew, many of whom are young people. It was devastating for the show to be cancelled at the final hour.’

‘Fortunately, our enthusiasm and love for live theatre is stronger than ever. We are eager for the show to see the light of day, and for audiences to finally return to the Roxy.’

Oliver is just one of many enticing and thrilling performance to hit the Roxy stage this year.  Highlights include the July performance of This is Eden.

Winner of the 2018 Drama Victoria Award, This is Eden, is an extraordinary tale of female rebellion and survival. Audiences will be transported back to 1839 to Tasmania’s infamous Cascades Female Factory, where in a solitary cell Mary Ford has been left for dead, ten thousand miles from home.  Here she plots escape and reveals, with biting mockery, the untold tales of her captors.

Later in the year comedy act Men Like Us will thrill audiences with their sidesplitting performance. From the makers of Women Like Us, which gained popular acclaim across the country, two of the best comedians in Australia – Lindsay Webb and Dan Willis – explore life as dads, funny-men and actors.  This show is hilarious, irreverent, and loveably hysterical!

In May, the Roxy will hit the road with a ‘Roxy on Tour’ production which will see the cabaret show The Soul performed live at the Croppa Creek Hall. This one-hour cabaret is filled with humour, original songs, a belly dance break and even a sneaky strip down to underwear – because what’s cabaret without it?

Audiences are taken on a ‘train journey’ as Laura addresses the pressures of perfection, anxiety, and modern life in our technologically fueled world.

The ‘Roxy on Tour’ shows are a way of taking a little slice of the Roxy Theatre to some of the smaller communities in the Gwydir, ensuring all residents in the Shire have access to cultural events despite the vast distances.

The littlest members of the family have not been forgotten with four high quality productions that will excite the imaginations of children and adults alike.

In May, Puppets, music, and magic bring life lessons onto the stage with Beep.

Later in the year, The Owl’s Apprentice combines show puppetry and physical comedy in a family friendly tale to show in August, and in September the Roxy will be hosting not one, but two sensational kids show Snow White and the Seven Cool Dudes and The Box Show.

Roxy Management is overjoyed to welcome audiences back to the theatre and remind patrons that attending a Roxy show is a great way to utilise their Dine and Discover vouchers, which can still be used for all Roxy shows up until 30 June, 2022.  The recently launched Parents NSW Vouchers will also be accepted.

For a full program of shows and events visit www.roxybingara.com.au or call the Bingara Visitor Information Centre on 6724 0066. 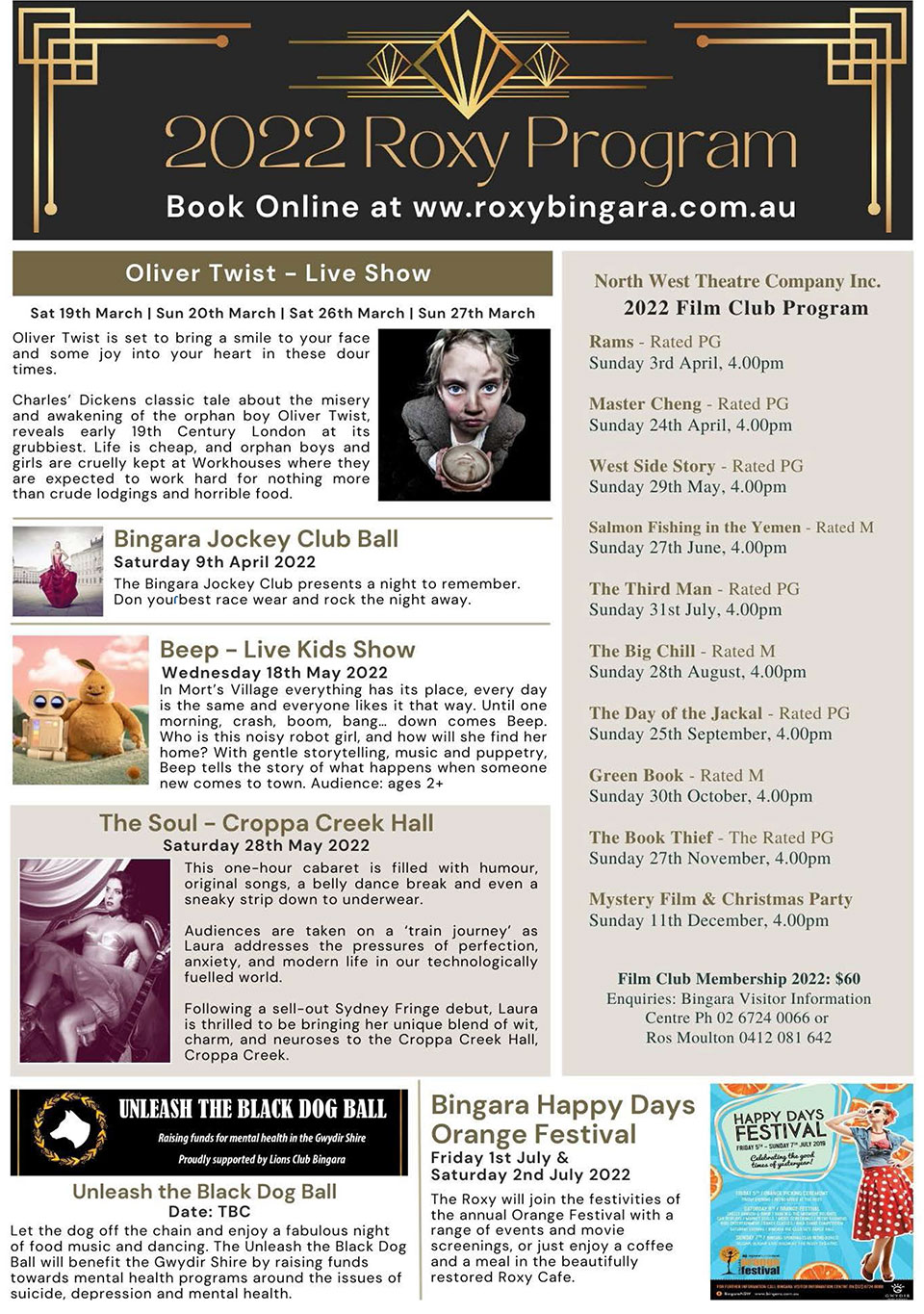 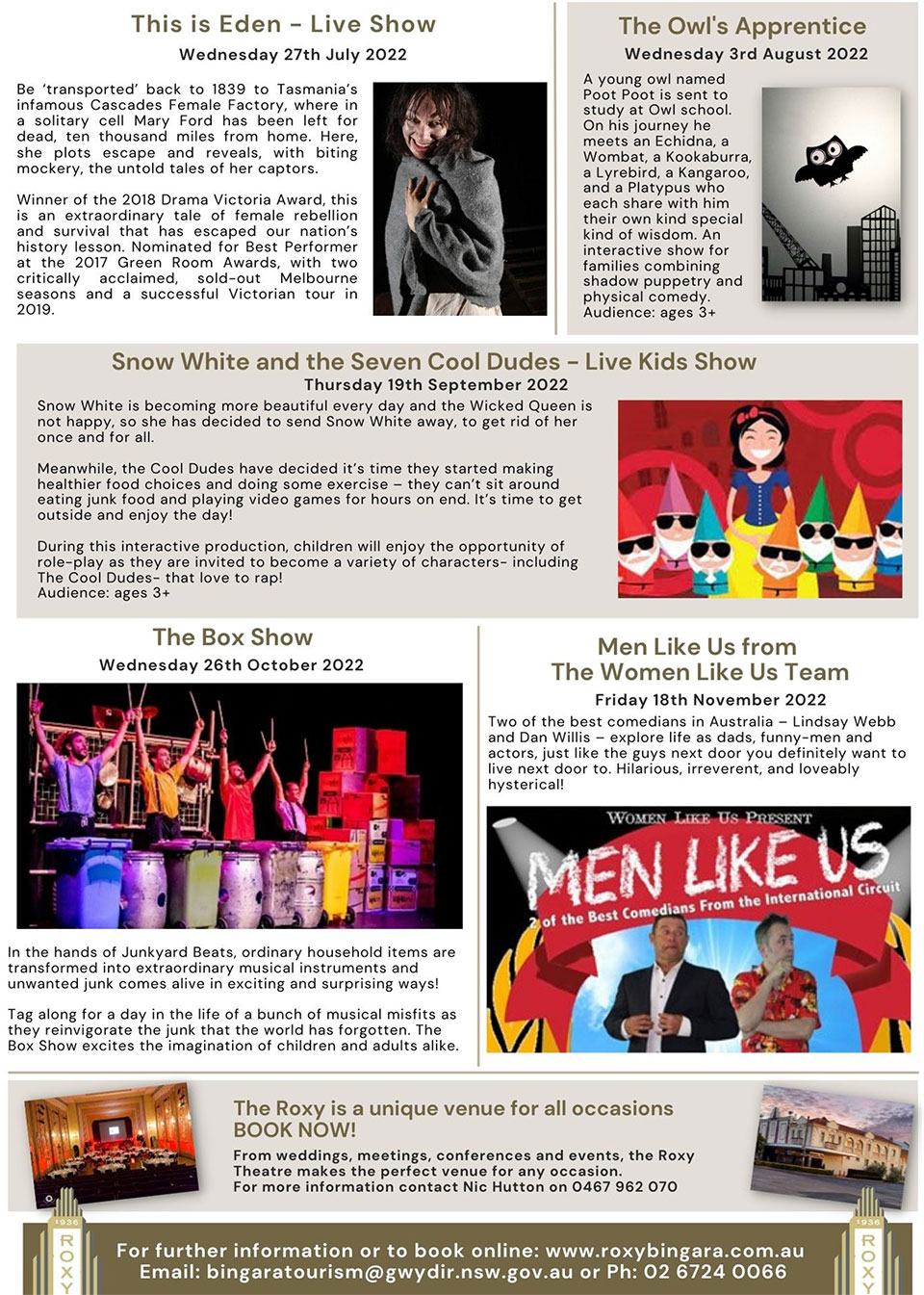