The School Musical that unites a town

Many schools in the New England/ North West have an annual musical production, but few if any, can say that they engage the whole town, and have all of the school involved.

June 16 will see the opening of five performances of “Joseph and the Amazing Technocolor Dreamcoat” at the Roxy Theatre in Bingara. This is a co-production of Bingara Central School and the North West Theatre Company and it will be BIG. 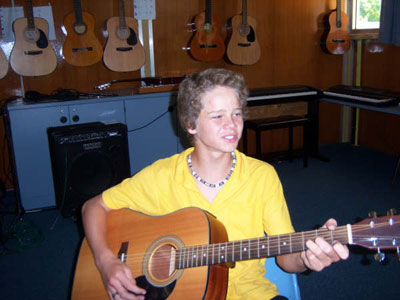 For a start more than 150 students will be on-stage, that’s more than half the school’s population. Then there are ten members of the school staff either on-stage or in the 12 piece band, and to top it all off, the star performer, Ben Nelson playing Joseph is not even from the school or the town.

Director, Rick Hutton explained how this bold and unique production came about. “Bingara Central School has had an annual variety night where each class group would perform an item.” He explained. “The North West Theatre Company, in planning its 2010 season saw the prospect of linking the class groups into one big story based musical. Joseph was the logical show.” He said.

From Kindergarten to Year 12, students from Bingara Central School plus a few friends from Warialda, some ex-students returning to help out, and many community members, have put in more than twelve weeks of preparation.
“All of our performers are worthy of mention.” Said Rick Hutton, “but Ben Nelson is a special talent. Not only does this Warialda High School year nine singer-songwriter, travel more than two hundred kilometers each round trip to perform as Joseph, but he mixes that with his football, and auditions for the NSW School’s Spectacular.” Rick said.

The three matinees for regional schools have been fully booked and tickets for the other two performances on Saturday night June 19 and Sunday afternoon June 20 are going fast. They can be secured by phoning the Gwydir Shire Bingara Office on (02) 6724 0066.