After devoting the last 21 years to providing care and service to the residents of Touriandi, Anne Withers has decided to retire.  Anne was appointed supervisor in 1994. At that time the supervisor’s position was all about “multi-tasking.” 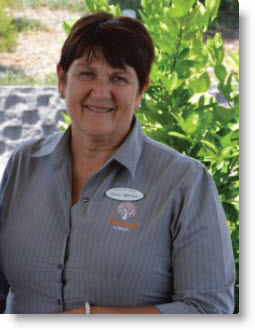 There were only 12 residents, and Anne along with the rest of the staff members were required to shower, cook, clean, wash. During the afternoons Anne would then attend to the office work.

Since its small beginnings in the early 90s Touriandi has grown immensely now encompassing twenty-eight permanent rooms and a secure wing suitable for Dementia residents.

As the changes progressed over the years, to Anne’s credit, she transitioned into the role of Manager with ease.  It could be said that Anne has inspired many as both a carer and a manager.

Over the years trainee Aged Care students and volunteers have passed through the doors of Touriandi and Anne along with all the staff of the facility have welcomed them with open arms. Some are now valued employees of Touriandi while others have moved on to become nurses and paramedics, having gained a strong foundation for caring.

Touriandi staff members told the Advocate that Anne was always thinking of ways to improve the lodge and to make the residents comfortable. They always came first.

Christmas was a special time with residents, families and staff and Anne made sure that they had all the Christmas trimmings with the help of great cooks.

Anne was instrumental in organising trips for the residents including trips to the school, Anzac Day celebrations, Inverell Pioneer Village and the list goes on.

It was always a priority for Anne to ensure that the residents still felt important and part of the community.

Anne spent a lot of time at Touriandi often going above and beyond her duties of overseeing the coordination of the day to day happenings of the lodge.  She often joked that she was going back to her ‘bedroom’ which was in fact her office due to the amount of time she spent there.

Anne is a very family orientated person and always ensured the residents were receiving the best care possible.  She played a big role at Touriandi and will be deeply missed by both residents and staff.

The staff of Touriandi wish her all the best in her retirement and thank her for her guidance and management in helping to create such a great facility for the elderly in Bingara.

A new manager for Touriandi has yet to be appointed.