Depending on where you source your information from, the collective noun for a group of volunteers is a cache, an army or a constellation. Whatever the case, the volunteers of Bingara Historical Society are a busy bunch with a driving passion behind them.

The Gwydir News caught up with two of the group this National Volunteer Week (May 16-22) to find out why they love what they do.

About five years ago, both Lynne Clarke and Ted Sparke were drawn to become members of the Historical Society, each with a different agenda. 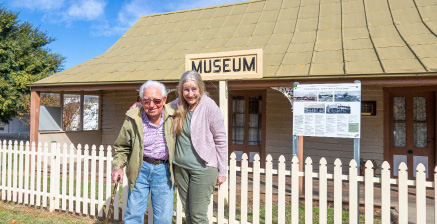 For Ms Clarke, it was the lure of rocks, having heard about the amazing and expansive collection housed within the Bingara Museum. Her curiosity for all things gems and minerals was more than satisfied when she walked through the doors for the first time.

“I really love gemstones, so I was blown away by the whole building of rocks. To be able to learn about them. For a little town it is unbelievable, there is so much stuff in there. I thought it was unbelievable – I was in heaven,” said Ms Clarke.

A curious mind and a passion for research tempted Mr Sparke through the doors for his first Wednesday meeting, a commitment he has continued as often as he can ever since. Having been tasked with cataloguing the Society’s expansive photo collection, Mr Sparke has thrived on unearthing treasures and connecting the dots that have sometimes been missed.

“I just enjoy research and looking and digging into the history of people. And, the good company,” he said. With an investigative mind, Mr Sparke, along with other Historical Society members, gets down to business most weeks in the comfort of the office space and storage building, constructed in the past few years, thanks to the NSW State Governement’s Stronger Country Communities Fund (Round 2).

“There just seems to be something about Bingara,” said Mr Sparke. “You go to some other places and they’re just bland.”

“I think Ted said it all, really. You could never call Bingara bland,” said Ms Clarke.