What a difference 50 volunteers can make. A little more than trailer loads of glass, plastic and rubbish were removed from the environment by Bingara area volunteers who took part in Clean Up Australia on Sunday.  A diverse group of residents took part, and came together to enjoy lunch in the park following the clean up.

Gwydir Ark volunteers organised this years clean up event and focussed efforts on the river environs.

Bingara Anglers club kayaked back to town from Honeymoon Island and collected numerous bags of rubbish from the river along the way. The going was tough as the river flow has been cut back dramatically in the last week.

Bingara SES launched the flood boat and also collected rubbish from the boat ramp towards Copeton Dam. Alec Lucke from the Bingara Garden Club reported not a lot of rubbish was found at All Nations Hill, excepting a lot of cigarette buts. Several bags of rubbish were collected from along the road.

Vision 20/30 cleared a trailor load of glass and rubbish from the common.

Local residents concentrated on the Park and Riparian Zones near the bridges. Megs Stamer has reported increasing amounts of rubbish being dropped on the North western River foreshore. The Heaton/Chaffey family also put in an amazing effort collecting several bags of rubbish from the Elcombe Road, including one burnt cooking pot!

The Myall Creek memorial area also received some attention from Clean Up volunteer this year, as it had been noticed that tyres were being illegally dumped in the rest area in front of the Myall Creek Hall. When volunteers arrived an even bigger mess was discovered when it was found that travellers and campers have been depositing rubbish in and in front of a cement tank. Students Erica Dixon and Hailee Martwigg rose to the challenge and had the mess cleaned up in no time.

It was interesting to discover that on the Gwydir Shire side of Myall Creek, there was very little rubbish, but the illegal dumping was actually occurring on the Inverell side of the creek. With the 180th Anniversary of Myall Creek occurring this June long weekend, this illegal dumping activity will be brought to the attention of both Gwydir and Inverell Councils.

After Clean Up volunteers enjoyed a beautiful morning tea with home cooked treats supplied by Vanessa Richardson and a big thank you to Lions club as well for cooking a barbecue lunch in the park. 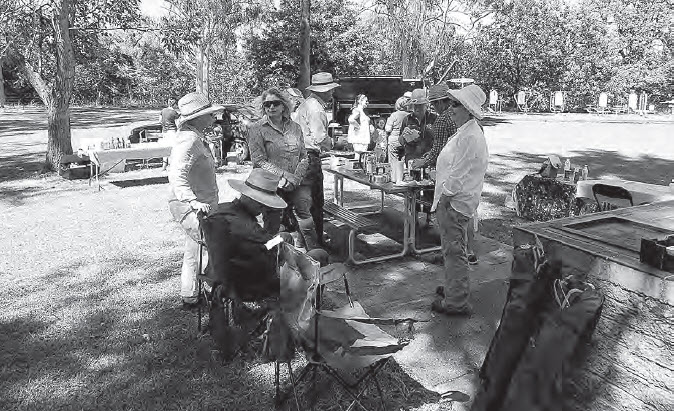 Volunteers were rewarded with lunch provided by the Bingara Lions Club.

In general, the amount of environmental rubbish was less than previous years, which was fantastic. The hard work of Gwydir Shire Council’s Environmental Staff is obvious – volunteers looked hard for the rubbish found. Bingara IGA supporting and enabling the container deposit scheme to operate in Bingara has also played a major part. The result shows that Bingara is a town that cares, and this is demonstrated so well by the town and district’s wonderful volunteers.