The next round of artists-in-residence at The Living Classroom has begun. The project, with the quirky title, “An Artist, A Farmer and a Scientist walk into a bar…” has recommenced with several of the artists staying at TLC during this week. 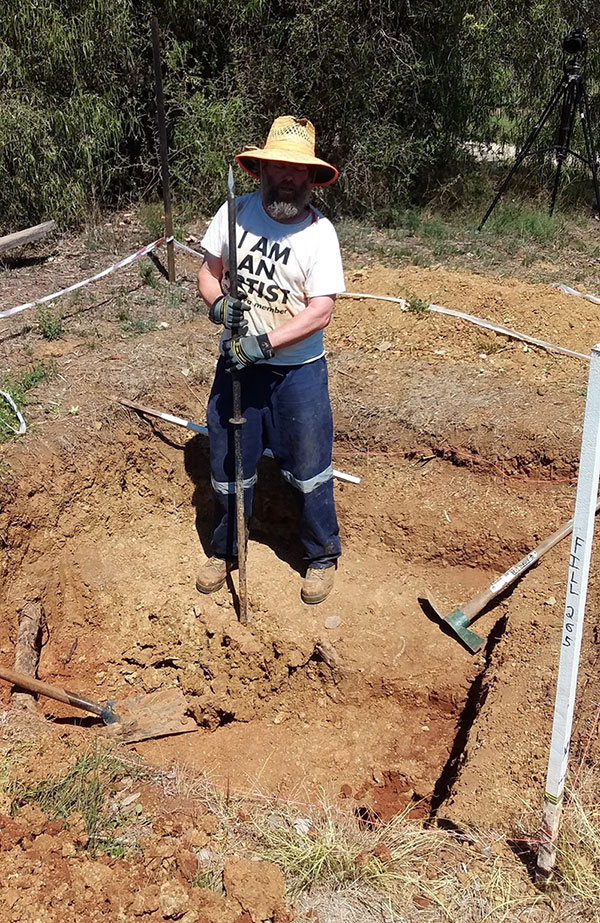 Artist Alex Wisser is on his way down under!

They include Alex Wisser from Kandos whose project is to dig, all by hand, a hole in the ground, ‘three metres down’. Artist Alex will photograph his progress such that the sequencing of his photo record will show him slowly ‘disappearing into the earth’.

“You get a totally different perspective of the soil and the Earth’s crust as you dig into it.” Alex said. “Digging a hole is always a journey of discovery. You don’t know what you’ll find. This might be a matter of uncovering the soil, which opens you to wonder about its composition, its history, its fertility, etc. But it might also be a matter of the thoughts you have as you work, your mind wandering. Digging a hole is a universal experience and so it connects to a lot of things – whenever I tell people what I am doing, I always get a story about someone else digging a hole and this always leads down a rabbit hole until we are talking about something completely else, but obviously connected. This is what an artwork should do, produce stories.”

The AFS project is a collaborative effort between the Kandos School of Cultural Adaptation in Central NSW and the Bingara Community to explore the links between art, agriculture and science. Alex welcomes anyone who would like to drop by at TLC, to see him at work and talk about digging holes.

During the past six months, the project has included the Launch Dinner at the Roxy in May featuring a menu of ‘wild foods’ harvested by master forager Diego Bonetto, and compiled by food designer Marnie Fox and the Friends of Touriandi, and organic meats produced by Glenn Morris of ‘Fig Tree Farms’, the AFS project has explored ways for better understanding and collaboration between the three groups of producers.

Artists Laura Fisher and Imogen Semmler joined Alex this week, and they joined with members of the Bingara community, Bingara Central School and the Gwydir Shire, for a social gathering on Tuesday evening. They viewed a film record of the work thus far produced by cinematographer Justin Hewisson, which included the launch dinner, and the Carbon Science: Carbon Culture workshops at TLC in June.

Artist/scientist Imogen Semmler is keen to progress her project which involves liaising with local farmers to see how they combine their productive enterprises with imagination and design. Any farmers interested in meeting with Imogen can contact her through The Living Classroom.

Artist Laura Fisher will be working with designer Jono Bolitho and farmer Glenn Morris to create works that tell the story of ‘humus’ the amazing substance that brings life into our soils. Their work will be on display along with all of the other research and artworks at the “Pulse of the Earth Festival” being planned for Bingara in September 2019.